Chevrolet manufactured the Corvair model for 10 years from 1959 to 1969 over two generations.The first generation ran from 1959 to 1964 and the second one from 1965 til the end.It came in different models over the years such as two-door coupe, convertible, four-door sedan, and four- door station wagon body styles, as well as passenger van, commercial van, and pickup truck variants. The Covair meant to compete with cars such as the Ford Falcon, Studebaker Larks, the Beetle and others but for not being very economical it unfortunately was not able to compete with the other brands.

Chevrolet noticed that the corvair buyers enjoy the great handling of the car and would prefer more engine power. Based on that feedback Chevrolet introduced 1962 the optional high performance option ("Spyder") that included a turbo charger supplied by Thompson-Ramo-Wooldridge for the coupe (Monza Club) and convertible models. 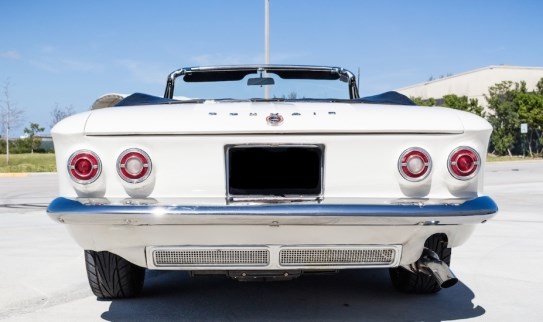 The Spyder turbo charged engine was able to provide 150 horsepower at 4,400 rpm which was almost 50 percent better than the concurrent 102 bhp "stage two" Corvair engine. The car was able to acceleration from 0 to 60 miles per hour in 10.8 seconds. At that time it was respectable power for a rather cheap car. The corvair engine was a 145 cubic inch flat six power plant position in the rear of the car.1964 some more improvements were provided such as 164 cubic-inch engine and a transsvers leaf springs for the rear suspension.

The Corvair was the first mass produced turbocharged passenger car. Oldsmobile has been beaten Chevrolet with announcement of the first turbocharged car (F85 Jetfire) by only a few weeks but the Spyder actually went on sale first.

Ralp Nader published  in 1965 his book 'Unsafe at Any Speed', a critique on the lack of safety of American-made cars. The first chapter, the chapter that everyone reads, used the 1960 - 1963 Corvair as an example, which gave the car an unsafe reputation. Chevrolet reacted by improving the independent rear suspension but was not able to recover from it. The production numbers declined over years until 1969 Chevrolet stopped the production of the Corvair to make space for another compact model.

By the way the name "Corvair" is a portmanteau of Corvette and Bel Air.