The turbocharger for the Corvair increased the horsepower from 80 to 150. The torque rating went up from 128 to 200 foot-pounds. The turbocharger was kicking in around 4000 RPM, which gave the car a nice boost when driving on the highway. In the third gear the car can accelerate from 50 to 70 in 6.2 seconds compared to 17.1 without the turbocharger. 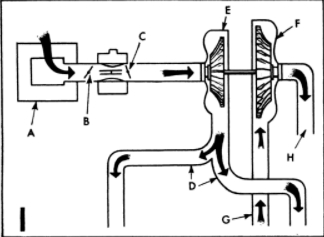 So basically the Corvair turbocharger is working the following way:

Exhausts gases (G)  from the cylinders are spinning the turbine (F) which is driving the compressor (E) that draws air through a cleaner (A) and carburetor (B,C) . The compressor is compressing the mixture and sends it on to the cylinders through the induction pipe (D)