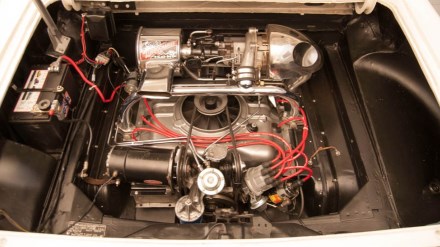 The Chevrolet Corvair were produced with a 145-cu.in. horizontally opposed six-cylinder (flat six) consisted of a cast-aluminum case mounting cast-iron cylinders and aluminum heads mounted in the rear of the car. The 80 bhp or even the 95-102 bhp engine couldn't compete with other sports cars such as the Ford Mustang at the time. So Chevrolet introduced the Spyder option which added a turbo charger to that engine.

The turbo charger uses the exhaust gasses to spin an impeller, whose power is transferred by a shaft running to a compressor, which in turn pressurizes the fuel/air mixture on its way to the carburetors. As the exhaust flow increases and its temperature rises, the turbine spins faster, thus adding positive manifold pressure or "boost."

The Spyder's was made by the Thompson Valve Division of Thompson-Ramo-Wooldridge Inc., and hooked to a fairly ordinary Carter YH sidedraft carburetor (the same one as used on the early Corvettes and Nash-Healeys).

The turbocharger itself was mounted above the engine, toward the rear passenger side of the engine compartment in a draw-through configuration, pulling through a single Carter side-draft carburetor. Made by TRW, the turbo's 3-inch turbine impeller--capable of withstanding 70,000 RPM--provided a maximum 10 pounds of boost, pushing output to 150 hp, a 47 percent increase over the 102-hp normally aspirated engine. Torque was also increased by 57 percent.

Chevrolet claimed that "usable" power was up 90 percent over the 102 hp version, which was at least partly true around 3,000 rpm; past that point, torque fell off.

There were some upgrades made to the Spyder for the 1963 season; the engine received a revised camshaft that, despite more aggressive lobe profiles, did not affect advertised power ratings. The more significant change occurred for '64, when the piston stroke was lengthened from 2.60 to 2.94 inches, increasing displacement to 164 cubic inches. In spite of the increased displacement, horsepower output remained at 150, though the longer stroke did boost the torque rating.

Not to hinder the Spyder’s performance potential, air conditioning, the three-speed stick and the Powerglide automatic were not available; the four-speed stick was mandatory.