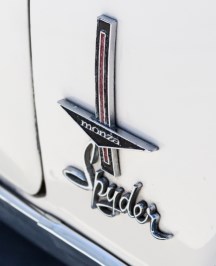 To make sure that your car is a true Spyder and not a 'franken' one you need to check the VIN number, Engine number and the Body tag. There is also a hidden VIN number stamped into the body on the pinch weld driver's side front suspension area, unfortunately you have to remove the front suspension crossmember to see it.I think if the VIN, Engine number and the body tags seem genuine than you chances are pretty good that your car might be a true Spyder.

All Spyder engine numbers are ending with YR and the number before indicate the date when it was build. E.g. T1008YR that is was build on the 8th of october. So if your body tag is confirming that it the car was build after the 8th of october then your chances are pretty good that you have a matching engine. Usually the engine and the body was build within a month. Some cars have engine from middle of September when the body was build in the middle of october. In 1964 the engine was increased to 164CID with the same YR code. Those engine have a different cylinder head numbers (3819904) which can be found underneath the engine shroud. For more information about the engine number please refer to the Engine Number article

The turbo charger should have P/N 3831691. If it has been changed for a 180HP turbo the numbers are different.

The body tag is another clue that needs to be checked. 1962 and 1963 models the Spyder Turbo option was optional and hence was shown in the ACC code. The letter 'D' should be in the ACC code that indicates the Spyder option. 1964 the Spyder became its own VIN number and hence would not be part of the ACC code anymore. The style should be 64-06 or 64-0667 for a convertible.All 1964 have been build in Willow Run Michigan, which means you should be able to find a WR in the body number.

Another clue is the voltage regulator, they sit at about a 45 degree angle to clear the Turbo air cleaner.

The Spyder spare tyre holder will have a dimple in it to angle the spare up slightly away from the turbo housing.