The turbocharger for the Corvair increased the horsepower from 80 to 150. The torque rating went up from 128 to 200 foot-pounds. The turbocharger was kicking in around 4000 RPM, which gave the car a nice boost when driving on the highway. In the third gear the car can accelerate from 50 to 70 in 6.2 seconds compared to 17.1 without the turbocharger.

The Corvair Spyder body was the same as the Monza Coupe or Convertibleone. Only minor trim variations has been added to the appearance of the car but still added and overall sporty and performance look.

To make sure that your car is a true Spyder and not a 'franken' one you need to check the VIN number, Engine number and the Body tag. There is also a hidden VIN number stamped into the body on the pinch weld driver's side front suspension area, unfortunately you have to remove the front suspension crossmember to see it.I think if the VIN, Engine number and the body tags seem genuine than you chances are pretty good that your car might be a true Spyder.

All Spyder engine numbers are ending with YR and the number before indicate the date when it was build. E.g. T1008YR that is was build on the 8th of october. So if your body tag is confirming that it the car was build after the 8th of october then your chances are pretty good that you have a matching engine. Usually the engine and the body was build within a month. Some cars have engine from middle of September when the body was build in the middle of october. In 1964 the engine was increased to 164CID with the same YR code. Those engine have a different cylinder head numbers (3819904) which can be found underneath the engine shroud. For more information about the engine number please refer to the Engine Number article

Read more: How to identify a true Spyder ? 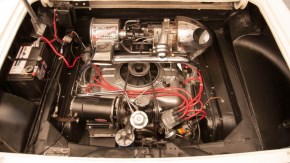 The Chevrolet Corvair were produced with a 145-cu.in. horizontally opposed six-cylinder (flat six) consisted of a cast-aluminum case mounting cast-iron cylinders and aluminum heads mounted in the rear of the car. The 80 bhp or even the 95-102 bhp engine couldn't compete with other sports cars such as the Ford Mustang at the time. So Chevrolet introduced the Spyder option which added a turbo charger to that engine.

The turbo charger uses the exhaust gasses to spin an impeller, whose power is transferred by a shaft running to a compressor, which in turn pressurizes the fuel/air mixture on its way to the carburetors. As the exhaust flow increases and its temperature rises, the turbine spins faster, thus adding positive manifold pressure or "boost."

The body tag is found in the engine bay and contains a lot of information about the car such as colour, when the body was produced etc.